“Mother Can Be Her Babys Worst Enemy”

Smoking During Pregnancy!!!
OMG There has been a lot of myths about Smoking while being pregnant out of which some of them are, 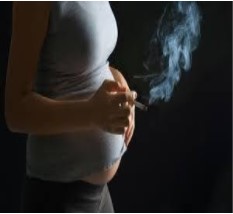 A Study reveals that between 10-18% of patients smoke during their pregnancy despite knowing that smoking can lead to lower birth weights for their babies. Smoking may make you feel calmer, but it hurts your body more than it helps. There is no safe amount of smoking. Every puff of a cigarette releases harmful chemicals that will reach your baby and affect your health too. E-cigarettes are also not harmless. Although there is still much to learn about e-cigarettes, pregnant women should not use them. The nicotine in e-cigarettes is harmful for developing babies. In addition, smoking can lead to several complications that most people do not know about. Smokers have a higher risk of miscarriage and stillbirth. They also have a higher risk of placental problems, such as “placenta previa” and “placental abruption”.
Mothers who smoke are more likely to deliver their babies early. Preterm delivery is a leading cause of death, disability, and disease among newborns. One in every five babies born to mothers who smoke during pregnancy has low birth weight. Mothers who are exposed to secondhand smoke while pregnant are more likely to have lower birth weight babies. Babies born too small or too early are not as healthy. Both babies whose mothers smoke while pregnant and babies who are exposed to secondhand smoke after birth are more likely to die from sudden infant death syndrome (SIDS) than babies who are not exposed to cigarette smoke. Babies whose mothers smoke are about three times more likely to die from SIDS. Babies whose mothers smoke while pregnant or who are exposed to secondhand smoke after birth have weaker lungs than other babies, which increases the risk for many health problems.
A woman’s ability to quit is greatly influenced by the people around her. She is more likely to quit smoking if her partner quits also, and if she is getting support and encouragement from other family members and friends. Copyright © StudyMRCOG|All Rights Reserved.|Disclaimer :  We are not affiliated with RCOG / RCPI / FCPS. We do not have any franchisees.| Secure & Safe Payments

Javascript not detected. Javascript required for this site to function. Please enable it in your browser settings and refresh this page.